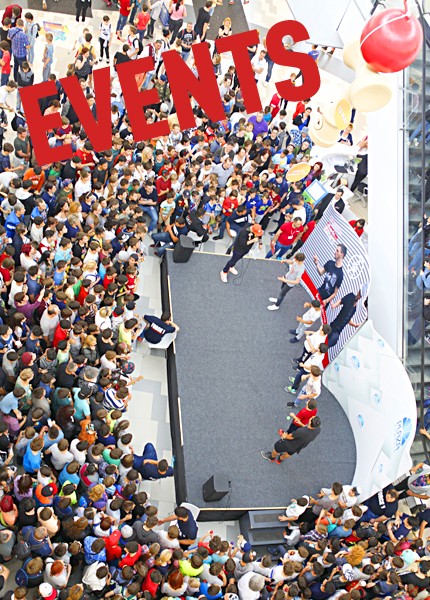 Events have been an important part of Kendama's history since the beginning of Kendama's life, and have been the most fun part of Kendama's life. In addition, you have to have events to which you can send all the team players, so you not only at home or play with friends Kendama. In any case, over the years, we have had a variety of events, whether attending, sponsoring or self-organizing. Here, in the following, we want to show Ech a few impressions from past events, which are best remembered.

Tomoya's Kendama Show was definitely a highlight at the EKO. At the time, the show was the ultimate in what the international skill level had to offer. Unbelievable, how times change.

The trip to the EKO in France was one of our first team trips abroad. At the time there were Yannick Brunner, Nikolas Schopfer and the gifted Bilboquet player Raphael Cochet.

Legendary was the first big Kendama event in Romania, which we organized in Bucharest in cooperation with Oase and CRBL. This event has opened a new chapter in Kendama history in Romania.

Another big event we have in the Plazza Mal, one of the most glamorous Malls Romania aligned. Special Act at the event was the music RAP Superstart CRBL, who gave his live debut of his Kendama song "King Dama".

The third German Kendama Championship was held in a bouldering hall in Mannheim. We took the opportunity to record a mini-documentary about the Kendama, the different competition modes and the player scene.

We visited the Kendama World Cup last year, where we had the opportunity to capture some nice impressions. We look forward to visiting Japan soon with a grown team. We will tell you how this year's trip will look like in one of the next blog entries.

In 2018, we once again participated in the World Cup in Japan with the Kendama Europe Team. Not only did we take part in the championship, but we filmed a documentary about the Kendama story. We are looking forward to introducing you to the first Kendama documentary soon.

First of all, we have already captured a few impressions from Japan.

The Kendama year 2019 started with a Kendama hype in Latvia. We were on the occasion with our team in Riga and have probably organized the longest championship in Europe. 329 participants from various countries played for the coveted titles in Speed Trick and Knock Out competitions. Another event highlight was the appearance of Reiks Ir Visur, who presented his specially produced Kendama track to the public for the first time at our event. Get an impression of the Latvian event here:

Tags: Kendama Europe, Sponsoring, Events, Competitions
Write a comment
Related products
Record H1 - Jyuzumaru X RCP
49.99€
This website uses cookies, which are necessary for the technical operation of the website and are always set. Other cookies, which increase the usability of this website, serve for direct advertising or simplify interaction with other websites and social networks, will only be used with your consent. More information
Decline Accept all Configure