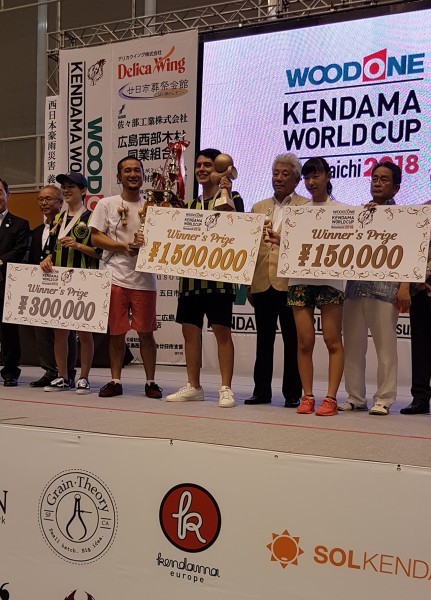 The Kendama World Championship in Hatsukaichi takes place annually and gathers over 500 participants against each other.

The great Kendama Kendama Brands of the World send their best team players to find out who the most skilled and best player in the world is. On the first day of the competition, the preliminary rounds take place, with each player getting two runs of 3 minutes to get as many points as possible. For this the player selects six tricks before his run, which he tries to show in the three minutes. The tricks that are available for selection have different levels of difficulty as well as different points that can be achieved in the event of success. After the two rounds on the preliminary round day, then the players with the highest scores, who have qualified for the finals. In the final, each player has another three minutes to get on stage as high scores by tricks. The time pressure, and the challenge to keep your nerves and a steady hand under stress, make the competition exciting and intense to the end.

But not only the competition itself, but above all the unique opportunity to meet so many like-minded people from all over the world, to spend time together, make the World Cup a very special experience. Being here once in a lifetime is a real dream of every ambitious Kendama player.

We were there with our team and not only participated in the World Cup, but also shot a documentary about it. The movie will be released in a few months, but you can already find a few short impressions here.